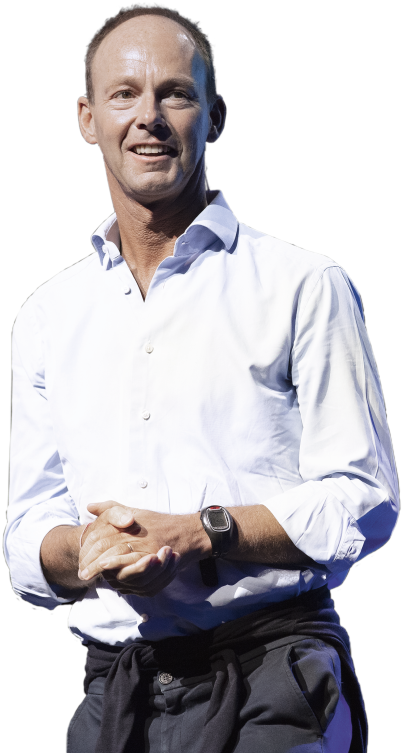 Chairman and CEO
of Bertelsmann

Yet another revenue increase, operating EBITDA at record levels, and Group profit of €1.1 billion are indicative of Bertelsmann’s successful business performance in 2019. Group revenues exceeded the €18 billion mark. Besides Penguin Random House, our strategic growth businesses were the main contributors to this, with organic growth of seven percent. The growth businesses’ contribution to Group revenues soared to 36 percent in 2019. Concurrently, Bertelsmann generated more than half its revenues from digital businesses for the first time. Countries outside Europe accounted for 30 percent of Group revenues; the lion’s share was attributable to the United States, as the world’s most important media market. So, in sum, in 2019, Bertelsmann once again became a faster-growing, more digital and more international company. Operating EBITDA reached a new record level of €2.9 billion in the 2019 financial year. And at €1.1 billion, Group profit exceeded the billion-euro mark for the fifth consecutive year. This gratifying business performance results from our strategy, which we continued to make considerable progress on implementing in 2019:

Strengthening the core: One of the key topics of 2019 was the establishment and expansion of alliances in the areas of content, advertising and technology. These initiatives create synergies and strengthen our core businesses in global competition. Successful examples are the Ad Alliance, Bertelsmann Tech & Data and the recently founded Bertelsmann Content Alliance. The latter unites all of the Group’s German content businesses, i.e. Mediengruppe RTL Deutschland including RTL Radio Deutschland, UFA, Verlagsgruppe Random House, Gruner + Jahr, and BMG. Meanwhile, RTL Group’s family of channels gained viewer market shares in Germany and France, and further enhanced their position in the TV advertising markets. France’s Groupe M6 expanded its business, among other things by acquiring the children’s channel Gulli. A milestone in the strengthening of our core book business was the announcement of Bertelsmann’s acquisition of full ownership in Penguin Random House, which will be completed in the second quarter of this year. Penguin Random House published the year’s three biggest-selling adult books in the United States, including Michelle Obama’s memoir “Becoming,” which has sold 13 million copies worldwide since November 2018. The world’s biggest trade book publisher expanded its position through acquisitions. At the beginning of 2019, the newly created global CRM company Majorel was launched. The Bertelsmann Printing Group reorganized its global printing business to strengthen collaboration between the printing companies.

Digital transformation: RTL Group increased its digital revenues to €1.1 billion. Its streaming services TV Now in Germany and Videoland in the Netherlands registered 1.4 million paying subscribers, up 37 percent from the previous year. Penguin Random House generated growing revenues from audio downloads, the fastest-growing format for our book-publishing group. AppLike, G+J’s app marketing platform, grew both its revenues and its earnings. Founded just five years ago, it now reaches more than 50 million users in 30 countries. Arvato grew with services for customers in the e-commerce, IT and technology sectors. We also further enhanced the digital skills of our employees with a large number of online courses in a wide range of disciplines, and a comprehensive scholarship program for online degrees.

Expansion in growth regions: Bertelsmann Investments’ global network of funds comprised about 230 investments at year-end. Around 80 new and follow-up investments were made in 2019. Bertelsmann Brazil Investments supported the IPO of the Brazilian education provider Afya. As you can see, Bertelsmann remains on a growth path – together with its more than 126,000 employees worldwide, whom I would like to sincerely thank for their commitment and dedication. I would also like to thank you, dear readers, for your interest in our progress.